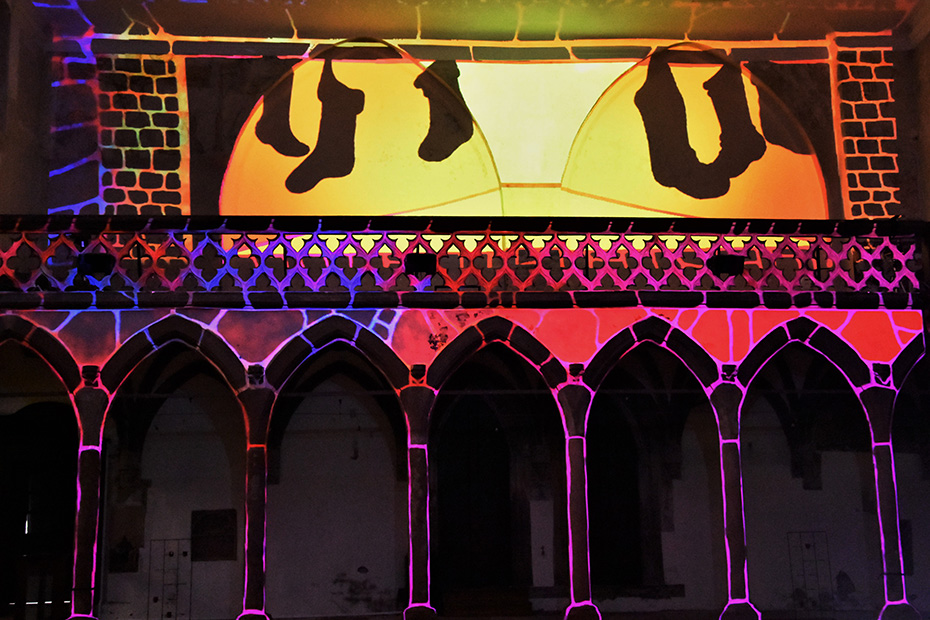 On this occasion, three questions were put to the team that came up with the project “Un Conte à Rebours".

1. How did your project come about?

“Un Conte à Rebours" came from the meeting of several local stakeholders in the cultural sector. Firstly, Nootoos and its interrelational space aimed at setting up group projects, and secondly, the association Art Puissance Art and its partner the Animaillons studio! With their artistic, poetic and daring events.
One day, at the heart of the dynamic developed within Saint-Pierre-le-vieux protestant church, the storyteller Nicole Docin-Julien told a story that she herself drew from recollections passed on by Christiane Singer. The journey of a tired old man, lost in a dense forest on a freezing winter night, touched the vicar Arnaud Stolz, and not only him! The artist Julie-Anne Weber, specialist in animated movies, was also moved by the story. One of the craziest projects began. They thought, what if we were to put on a sound and light show in the run up to Christmas?

2. Can you tell us more about the story and its creation?

“A dark, moonless night. Winter.
He walks on, disappears into the forest, tripping on the icy ground.
Suddenly, a clearing appears in front of him.
A house stands in the middle of the clearing. A woman appears on the threshold, enshrouded by the fire from the fireplace… “

After recording Nicole Docin-Julien’s voice, Julie-Anne Weber began to put it into pictures. Her brother, Jean-David, song-writer and sound-designer, started working on the music. Arnaud, Nathalie, Jean Bruce and Adèle managed the organization, the logistics and communication. And the story came to life.

The show combines traditional animation and multimedia technologies. There are animals drawn in charcoal, trees made of cut-out paper, moving paintings and sand lines assembled in a kaleidoscope of memories and textures. The visuals are animated image by image, by hand like before. The video mapping technique then fits the building’s structures and volumes, and the stones begin to speak. To the tune of the dreamlike soundtrack, the dancing images plunge spectators into augmented reality, a place reinterpreted a thousand times. The "Un Conte à Rebours" mapping proposes its light dream for the festive season.

3. What else does this event have to offer in addition to the story?

NooToos and Art Puissance Art have joined forces to entirely fabricate a sound and light show, making it a magical moment. The experience begins as soon as you enter the splendid building, jewel of Strasbourg's heritage. In the reception area, you can see behind the scenes of the project and a making of, and gently bury yourself in the graphical and architectural universe prepared especially for you.
Tickets to the ready! It’s time for an immersive experience! Just imagine, you can be sitting comfortably in a chaise longue or on a big cushion, gently rocked by sound and music while watching the church’s walls and ceilings come to life. Experience this poetic moment at the heart of the magic of Christmas, to the rhythm of words and colors. Along side your hero, here you are invited on a fifteen-minute inner journey, through the imaginary world of the story, a personal journey back in time to your childhood… Adventure awaits you!

Follow us on social networks and use the hashtag

Send us a message